Pain and Inhumanity at the Gas Station

"I really don't feel like talking to you right now."

The young woman's voice came from somewhere behind me. I'd been flipping through late-night Twitter while a gas pump replenished my Mazda's hydrocarbon supply. My ears pricked up.

As a writer, I'm kind of a professional observer. I can't tell stories that ring true if my eyes and ears aren't open to the world around me. It's little conversations, little actions, little details that connect reader to story. Especially in fiction writing, these drops of humanity are the fuel of the creative engine.

I looked over my shoulder and saw nothing but a big white Cadillac Escalade right behind me. I started sketching details in my mind: What the speaker looked like, where she worked (Escalade!), who was on the other end of the phone, where the conversation would go from here. As she kept talking, though, her words grew louder. More strident. More urgent.

"I don't know you," she said. "We've never talked. You're approaching me, at night, at a gas station, when I'm by myself—" Oh no. She wasn't on the phone. The person bothering her was here.

I immediately took a few steps left to see what was going down. She wasn't by the Escalade, she was on the far side of that pump, talking to someone I couldn't see. Despite intermittent rain, she was in just a Michigan State T-shirt and thin gray pants—but the way she was drawing into herself had nothing to do with weather. She was pale, shaky, covering herself with one arm and tucking hair behind her ear with the other.

I had no idea how close the other person was. I took a few steps forward, and her eyes flashed over to me. I stopped, and put a hand up. I asked her if she was okay.

"Yes, I just—" back at the other person—"REALLY DON'T APPRECIATE someone I DON'T KNOW coming up to me, at night, and asking me for money." She radiated force, anger, hurt. Then she looked back at me, and the switch flipped. All smiles. "Oh, I mean, yes, I really appreciate it, I'm okay, thank you! I mean, I really appreciate—yes! Thank you so much for doing that!"

My ego puffed up a little bit: I did a good! My writing brain leapt to the obvious conclusion: The young woman was a survivor of sexual assault, and had just been severely triggered. Then I whapped both my ego and writing brain upside the head: A) All I did was ask if she was okay, which is what anyone in that situation should do, and B) A person doesn't have to be a rape survivor to want to pump gas in peace.

I spun on a heel to go back to my car and stopped short. There in front of me was a middle-aged Black man. He was gaunt, wearing a saturated windbreaker and drooping droopy hat. His eyes didn't quite meet mine.

I've been rooked by enough desperate people willing to take a mile if I give an inch that I have a policy: I'll give them whatever change I've got in my pocket. I'm not peeling off bills, I'm not giving out rides, but unless I'm literally penniless I'm not turning them away empty-handed.

Here is this man, plausibly a homeless veteran, having just been severely told off by a young woman for scaring her, trying again just a few feet away. For him, every one of these interactions is pass/fail: Money, pass. No money, fail. She was a fail, so I got the same pitch.

I couldn't possibly give this guy cash, not with the woman he terrified standing right there, so I declined (and, uselessly, apologized for it). Yet, it was the day after Memorial Day, and I had this Rob Rogers cartoon ringing in my head: 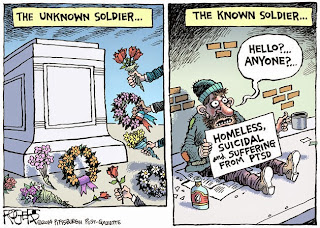 And again, maybe this guy wasn't a veteran, and maybe he was. Either way, it wouldn't change the fact he's utterly dependent on the charity of the privileged to eke out a miserable existence. Nobody deserves that.  For that matter, nobody deserves to be loudly chewed out for humbly asking what is in our capitalist society the most humiliating possible question.

Of course, no one deserves to be raped, either.

The young woman hopped in her car and drove away, waving to me out the window and shouting "THANK YOU!" across the parking lot. The man shuffled off, walking his bike back into the night.

The damage we do to each other, the scars we leave on each other, keep us from helping each other heal. In our pain, we hurt each other even more.
Posted by Ty Schalter at 10:37 AM

I'm currently a regular contributor to FiveThirtyEight, previously at VICE and Bleacher Report. I also hosted the weekly "NFL Inside Read" show on SiriusXM, and am frequently heard on radio shows and podcasts all over (including my twice-weekly national NFL podcast, "Three & Out").

I'm also an author, with three non-fiction books out via Enslow-Rosen Publishing, and a novel draft in revisions.

To connect, hit me up at the horrible bird site (DMs usually open), or email [email protected]

My custom Spore site has the latest stuff from (and Follow buttons for!) all my content channels and social-media feeds.